Prop Gift For The Movie Fan! 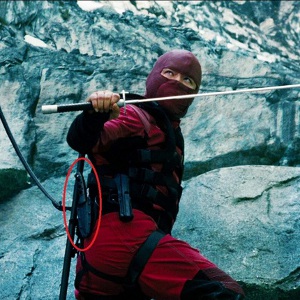 Item Description: A Cobra Ninja’s Stunt Tactical Knife and Sheath seen in Jon M. Chu’s 2013 action adventure, G.I. Joe: Retaliation. In the film, Roadblock (Dwayne Johnson) leads his team against Cobra after a brutal air assault wipes out most of the Joes. Knives of this style can be seen holstered on the hip of Cobra Ninja’s during their epic icy mountain battle against Snake Eyes and Jinx. This rubber stunt knife is a cast from an actual Fury 75535 SOB tactical blade and features original manufacture markings etched into the sides of the blade. Paired with the knife is a durable plastic sheath with a clip, allowing it to be mounted to a belt or tactical rig.

How much will you be charged for shipping? Because nearly every item in Prop Store inventory is unique, so they are unable to provide you with a shipping cost until you place your order.

The Prop Store, as the name implies, specializes in movie collectables. With offices in both London and Los Angeles, The Prop Store will hold a live auction of film and television artefacts on Oct 16. You can participate and bid in person, online or by telephone. A selection of over 200 lots will be on exhibit at Vue from 1st to 16th October. Some of the items are fixed priced. You can find more collectables on their All Memorabilia and New Additions pages. Somehow for now the website is a bit slow to load up, probably they have tons of items to display. 🙂

This site uses Akismet to reduce spam. Learn how your comment data is processed.